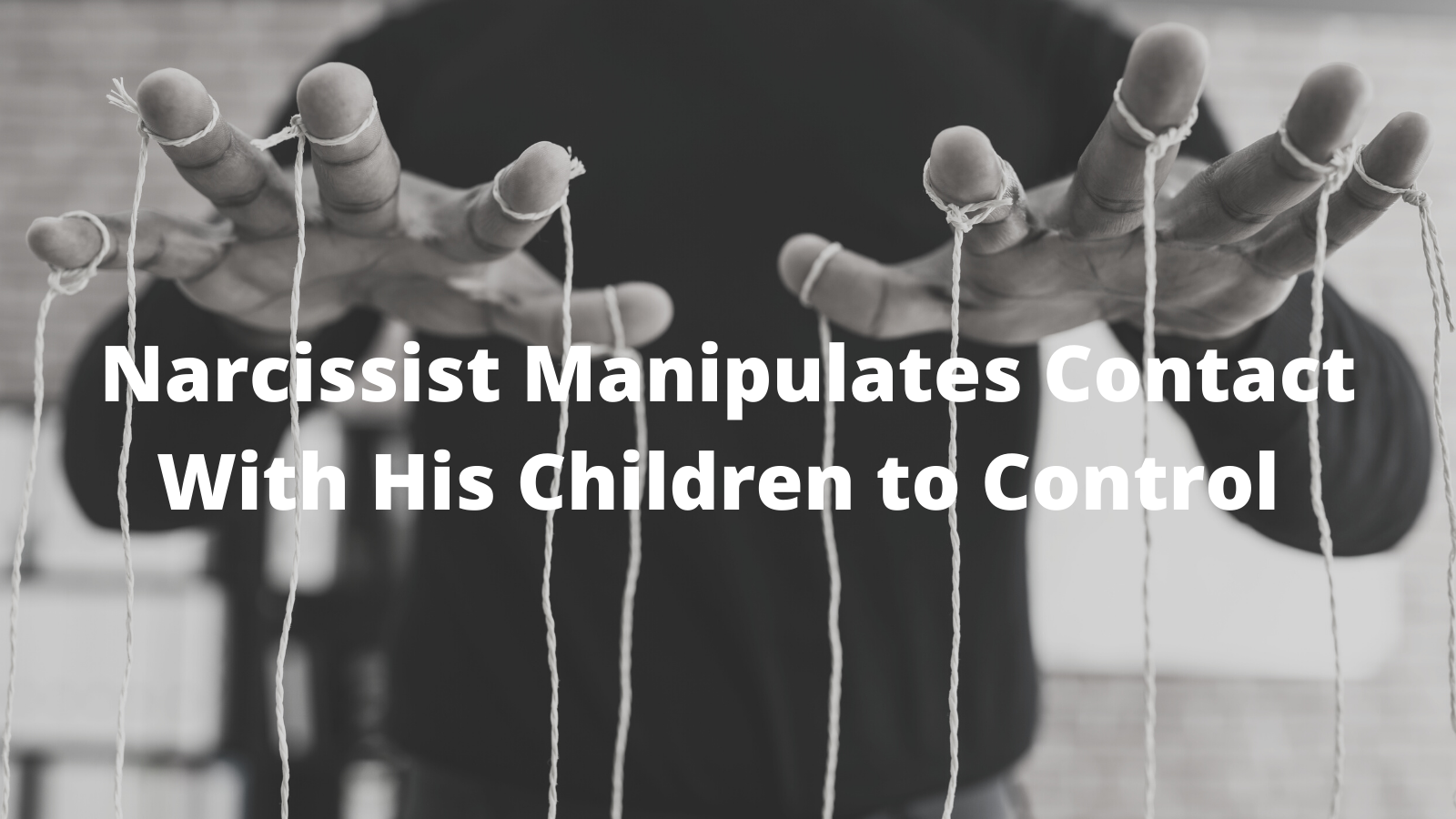 Gordon loved to use the children to manipulate and control me. The letter I wrote to him below shows an example of one of the ways he achieved this.

I texted the narcissist with the information.

He then called me saying he was ‘confused’ because on January 1st I told the children that, ‘mum won’t let me see you’, which was a lie he told his family on New Years Eve to smear me after I refused to be taken advantage of and manipulated into giving his relatives a lift.

The story of that saga is here.

What this had to do with the badminton coaching I do not know. Maybe he wanted me to say that he couldn’t see them so he didn’t have to and he could do what he really wanted to do.

Perhaps he thought I was trying to ‘foil’ any attempt he had at having time to himself as he accused me of here.

I asked him to speak to my son about the arrangements and to tell the children himself what his intentions were.

Gordons agenda was not what was in the children’s best interest. It never was.

He didn’t want to take them to Trafford David Lloyd as he has shopping to do in Warrington B&Q and as usual he left the children at their badminton classes and went shopping this time for a sink apparently.

Why Gordon could not just say that he couldn’t because he had shopping to do? I had no problem in taking the children to Trafford David Lloyd.

A typical manipulation Gordon used was to keep the times he picked up the children ‘flexible’. This letter has an example of this where he says.

He liked to not show up and turn his phone off so we couldn’t ring him.

In this letter I ask him to stop lying and telling the children that ‘mum won’t let me see you’ which is lies and manipulation to make me out as the wicked witch in his story.

Mark Golds offered badminton coaching at the above times. I text you to ask if you could take Dom and Alyx. Your normal contact time is 5.00 till 9.00 and you would have been able to have I hour extra contact time with the children. le. Pick them up at 4.00 p.m. Dom had told me that he wanted to go.

You then telephoned me and said you were ‘ confused’ because on January Ist I had objected to you telling Dom ‘I can’t take you tomorrow. Mum won’t let us.’ as we left the New Years Eve Party. (You had arranged an activity to see the children the following day and behind my back. Then accused me of not letting you see them.) 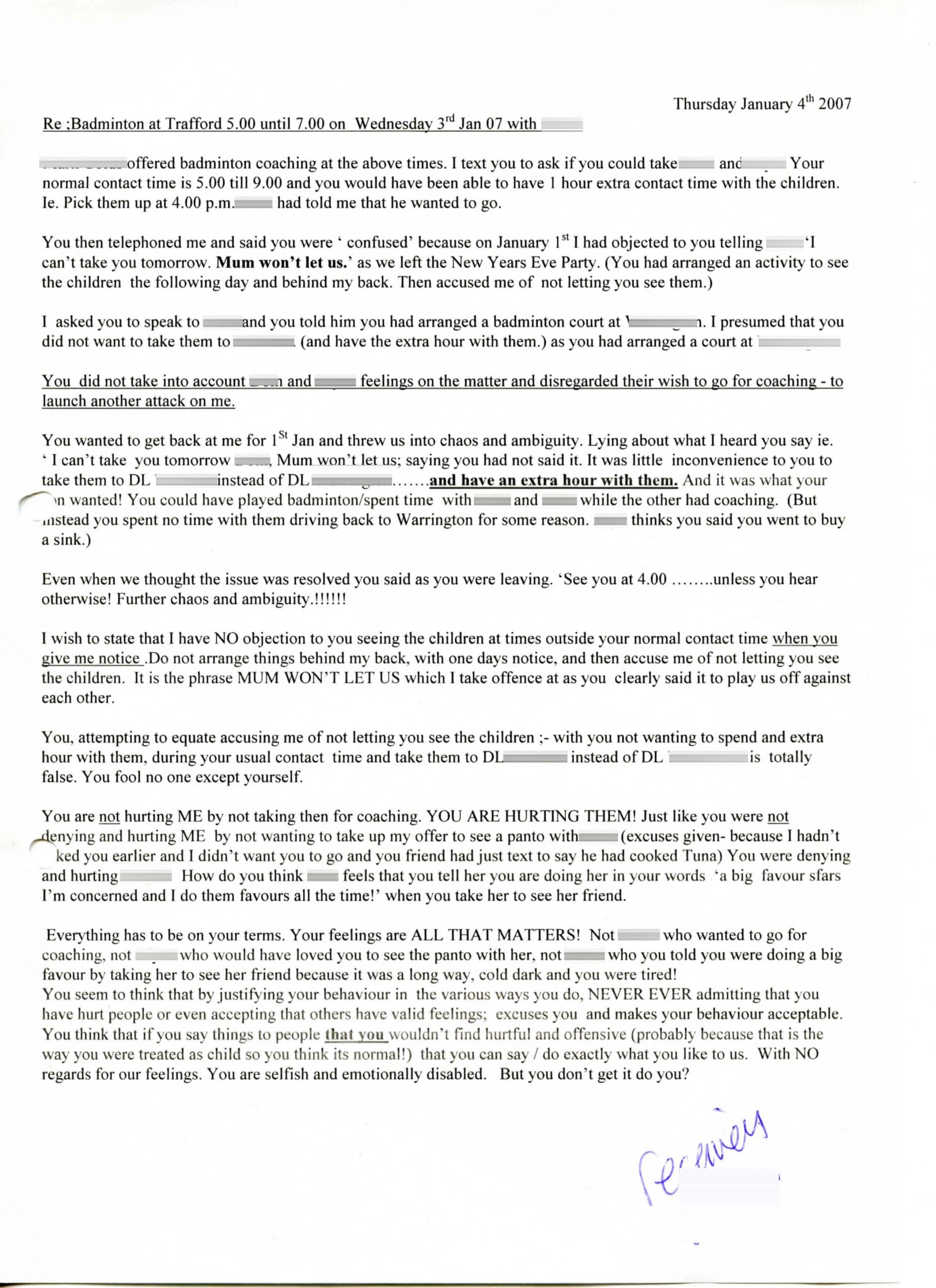 You did not take into account Dom and Alyx’s feelings on the matter and disregarded their wish to go for coaching- to launch another attack on me.

You wanted to get back at me for Ist Jan 2008 and threw us into chaos and ambiguity. Lying about what I heard you say i.e. ‘ I can’t take you tomorrow Dom, Mum won’t let us; saying you had not said it. It was little inconvenience to you to take them to DL Trafford instead of DL Warrington and have an extra hour with them. And it was what your wanted! You could have played badminton/spent time with Alyx’s Dom while the other had coaching. (But stead you spent no time with them driving back to Warrington for some reason. Alyx thinks you said you went to buy a sink.)

Even when we thought the issue was resolved you said as you were leaving.

I wish to state that I have NO objection to you seeing the children at times outside your normal contact time when you give me notice .Do not arrange things behind my back, with one days notice, and then accuse me of not letting you see the children. It is the phrase MUM WON’T LET US which I take offence at as you clearly said it to play us off against each other.

You, attempting to equate accusing me of not letting you see the children ;- with you not wanting to spend and extra hour with them, during your usual contact time and take them to DL Trafford instead of DL Warrington is totally false. You fool no one except yourself.

You are not hurting ME by not taking then for coaching. YOU ARE HURTING THEM! Just like you were not denying and hurting ME by not wanting to take up my offer to see a panto with Alyx (excuses given- because I hadn’t

ked you earlier and I didn’t want you to go and you friend had just text to say he had cooked Tuna) You were denying and hurting AL YX. How do you think Britt feels that you tell her you are doing her in your words,

‘a big favour sfar  as 1 ‘m concerned and I do them favours all the time!’ when you take her to see her friend.

Everything has to be on your terms. Your feelings are ALL THAT MATTERS! Not Dom’s who wanted to go for coaching, not Alyxs who would have loved you to see the panto with her, not Britts who you told you were doing a big favour by taking her to see her friend because it was a long way, cold dark and you were tired!

You seem to think that by justifying your behaviour in the various ways you do, NEVER EVER admitting that you have hurt people or even accepting that others have valid feelings; excuses you and makes your behaviour acceptable.

You think that if you say things to people that you wouldn’t find hurtful and offensive (probably because that is the way you were treated as child so you think its normal!) that you can say/ do exactly what you like to us. With NO regards for our feelings. You are selfish and emotionally disabled. But you don’t get it do you? 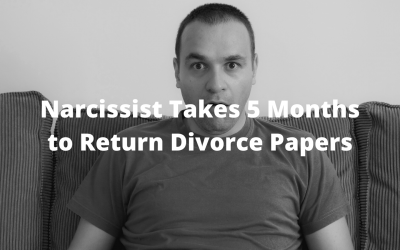 Despite him telling his solicitors Pannones that he was intending to divorce me and that I had physically assaulted him our entire marriage and that he had kept 'a careful diary record' it took Gordon almost six months to return the papers! He is such a liar! Here is... 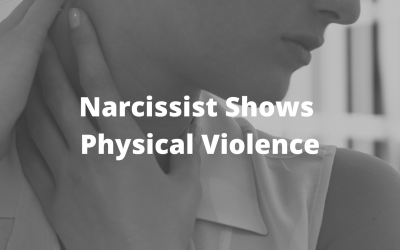 The narcissist only showed physical violence on one occasion. It was in April 2007 after Gordon meet his new 'friend' as he called her at that time. He wanted to see the children so he could play happy families with her and her three children. We already had plans so... 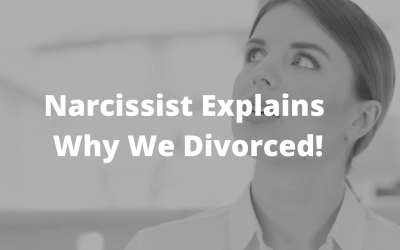 The Narcissist Explains Why We Divorced!

It's all my fault! This is a great example of blame and lack of accountability. Gordon says we split up because I misinterpret the things he does and always see the worst interpretation of what he does. He says he is 'worried' and 'defensive' because I criticise him.... 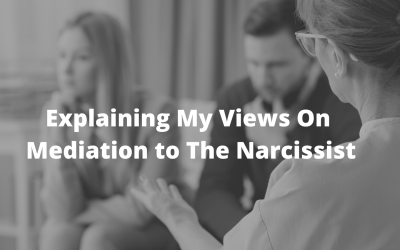 Explaining My Views On Mediation to The Narcissist

At the start of the divorce it was suggested by my solicitor that I try mediation with Gordon to save us both large solicitors fees and reduce conflict. Not knowing that he was a narcissist I thought it might work although by now I had experienced first hand his... 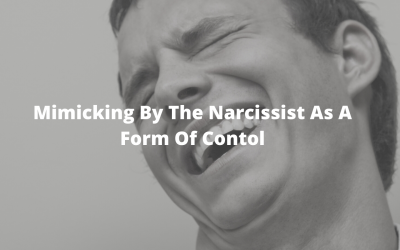 Mimicking By The Narcissist Is One Form Of Abuse

The Smirk is a Provocative Tool Used By The Lesser Narcissist like Gordon.  Gordon likes to use non verbal abuse as a means of control and gaining fuel from me. The smirk was a provocative act he liked to use. He would smirk when I said anything and at anytime when he... 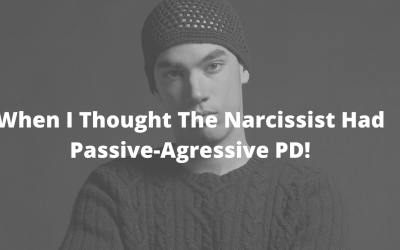 When I Thought The Narcissist Has Passive Aggressive PD!

I came across a website about Passive Aggressive Personality Disorder which fitted the behaviours of Gordon perfectly! It was the 16th July 2006 It was a eureka moment for me! I felt validated and started to understand what PAPD was and that it is a well known type of...