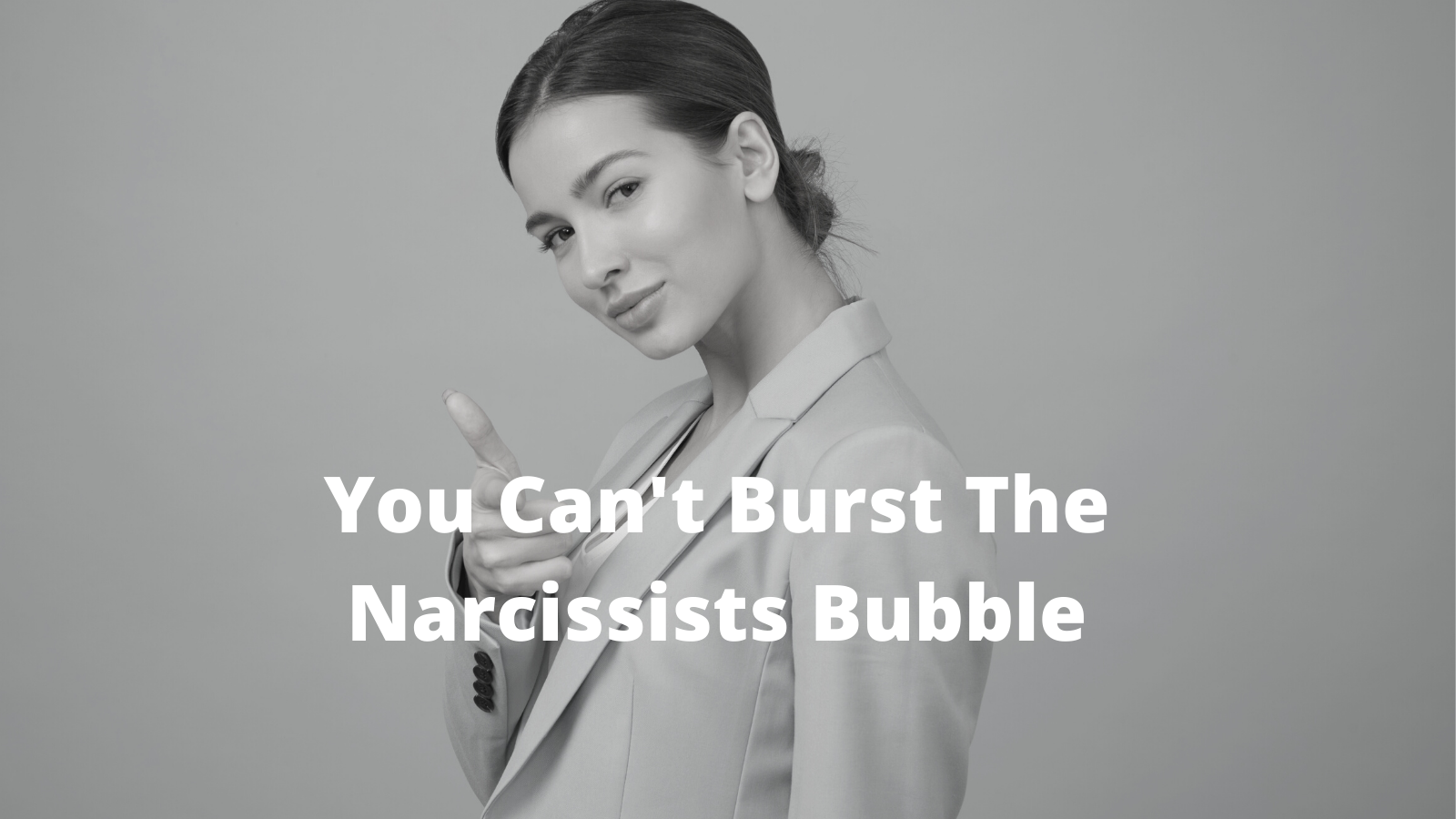 This video by Frank Yeomans explains exactly why it is impossible to have a relationship with or to help a narcissist. You can’t burst the bubble that helps them to feel good about themselves.

He gives such a great example of a woman who believes she is going to become an international opera star at the age of 50 and why she can’ t be helped to live in reality.

Any relationship I have with my niece will be pointless and fake with me going along with her fantasy and delusions.

It is a sad and terrible thing to have to accept but she cannot be helped.

She is the granddaughter of my narcissistic father and mother.

And so it goes on, down through the generations.

Interactions with my niece brought narcissism to my attention!

At first, she seemed ‘normal’. On the surface she seemed to be a normal young mother of two kids trying to make a life in difficult circumstances. I understood her background and the difficult time she had had as my sister – her mother was neglected by my narcissistic mother in the most terrible way. My niece was born to a 16-year-old child and an equally young father. She tells horror stories about the way my sister treated her which makes sense now that I understand narcissism.

My narcissist mother and father are the cause of all this misery and I wanted to help her to achieve what she said she wanted in life.

The way she interacted with her children ‘ hot and cold’ was another clue. One minute she was posting pictures on Instagram saying thanks to the universe for these two amazing humans while in reality she was hating them because she couldn’t walk around Ikea without them ‘playing up’ . They were just being kids and she was the issue for not being able to parent them. She was still breast feeding on demand, her almost two-year-old and when he wanted feeding in the middle of Ikea, she carried him around the store while feeding him and hating him for his demand. During the same visit I saw her thrust an Ikea hotdog into her daughters hand saying she had better eat it because that was it for food. She didn’t cook and her cooker had the lid down and a candle on it. On one occasion she fed her son three ice lollies and a packet of Whatsits as that was what he wanted. I didn’t see her older child eat. When they came for lunch the kids just ran about while we ate.

One minute her partner was her ‘soul mate’ while in the next she would say she and her daughter wanted him to leave. He was like a ghost in the house and they hated him! She was feeding her daughter with hate towards her father who repeated what her mother said about him. This is called ‘smearing’ and is exactly what happened to me. It leads to parental alienation in the end.

The main behaviours that gave the game away were her schemes and plans (or lack of) for various businesses she wanted to start and various jobs she had applied for. At first she wanted to be a mindful artist so me and my partner bought paints and made the large canvases she asked for.

We even spent time setting her up with a website. She came up with all sorts of lies about meetings with local artists and finding studio space which we actually believed at first. Then the logistics of her situation began to dawn on us. She has the school run twice a day and a breast feeding two-year-old. Also we could see that no action on her part was taken or could be taken. She said she had childcare from her father and step-mother but this never seemed to materialize as they had an excuse when push came to shove.

Other schemes she had were converting the attic to a space for her daughter and dividing the bedroom so her daughter has her own space. She has a two-bedroom house and her ‘soul mate’ partner sleeps in one room while she and the two children sleep in the other in bunk beds.

She wanted to earn money so we offered to set her up with an eBay store where she could sell unwanted items. We even fitted shelves and a storage space where she could work. It became clear that she wasn’t doing that either. When we fitted the shelves, she sat in the other room with her daughter whispering and I overheard her saying, ‘don’t worry they’ll be gone soon and we’ll get out house back.’ If it wasn’t for my partner, I would have left the shelves unfinished and headed home.

We took her and the children camping where she acted like one of the children and did nothing. She left after two night because it was too windy in the tent, leaving everything for us to pack up, She told us throughout that she was used to 5 star hotels and coming down to breakfast all laid out for her. She wanted a camper van and said she was getting one soon.

One day I took a look through her Instagram page. There before me were pictures of fantasy schemes, businesses and facades she had ‘created’ going back years! She had pictures of business cards for some of her schemes. These included being an interior designer, a cleaning company, a nail art studio which she operated from the downstairs toilet, a cactus shop and the latest – mindful artist and running a playgroup.

She had various job interviews and actually told us she had got various jobs. When I asked her who would look after the children, take them to school and pick them up, and how she would breast feed her 2 year old I was met with anger and abuse such as ‘you ask way too many questions you do!’

It soon became clear that something was not right in the way she behaved and functioned. Some how while online I came across narcissism and everything made sense. All her behaviours were written there before me .

I realised that everything was a façade. She even pretended to be interested in the same things as us but it was all lies. She was using us for residual benefits. I even gave her money to buy the children toys as she told me she had overspent by treating them to a bike and a scooter. She said she didn’t like asking her partner for money and she had only £5.00 to buy food. All lies.

The final give away was when she told me that her ‘soul mate’ partner had left and taken the car which he hired for her, so she needed a new one. We nearly rose to the bait! Then we stopped and analysed the situation and realised it was yet another ‘pity play’ ploy to engage us in her fantasy world.

Maybe she thought I would buy her a car?

When I realised I was being used for fuelling her grandiose ideas I decided to see what would happen if I fed her fuel big style!
One day she texted with another lie about taking her mindful art classes into schools. I texted back that she was ‘amazing’, ‘so creative’ and ‘wonderful’. I fed her the best possible fuel.

As I predicted, she rang immediately but I didn’t take the call.

She went crazy! She began demanding and ordering me to call NOW!

I texted saying I was in the middle of getting my phone fixed or possibly swapped – which was true and that I would call her later. She would not accept that. She said I had to use my partners phone and call her now. She pestered and pestered before finally texting me, ‘YOU ARE WASTING MY TIME. BYE.’

Take a look at the Facebook messenger thread with her mother here where you will see a very similar pattern to the interaction when I won’t do as I am told by her mother!

That was our last interaction. Apart from her trying to hoover me with a couple of texts asking where the paints were that I bought for her as she couldn’t find them and she didn’t want to waste anymore of her time looking for them. She told me she could tell that I was still viewing her Instagram posts which I don’t think is possible. I unfollowed immediately.

Needless to say I did not reply.  The interactions reminded me to leave my fixer role behind.