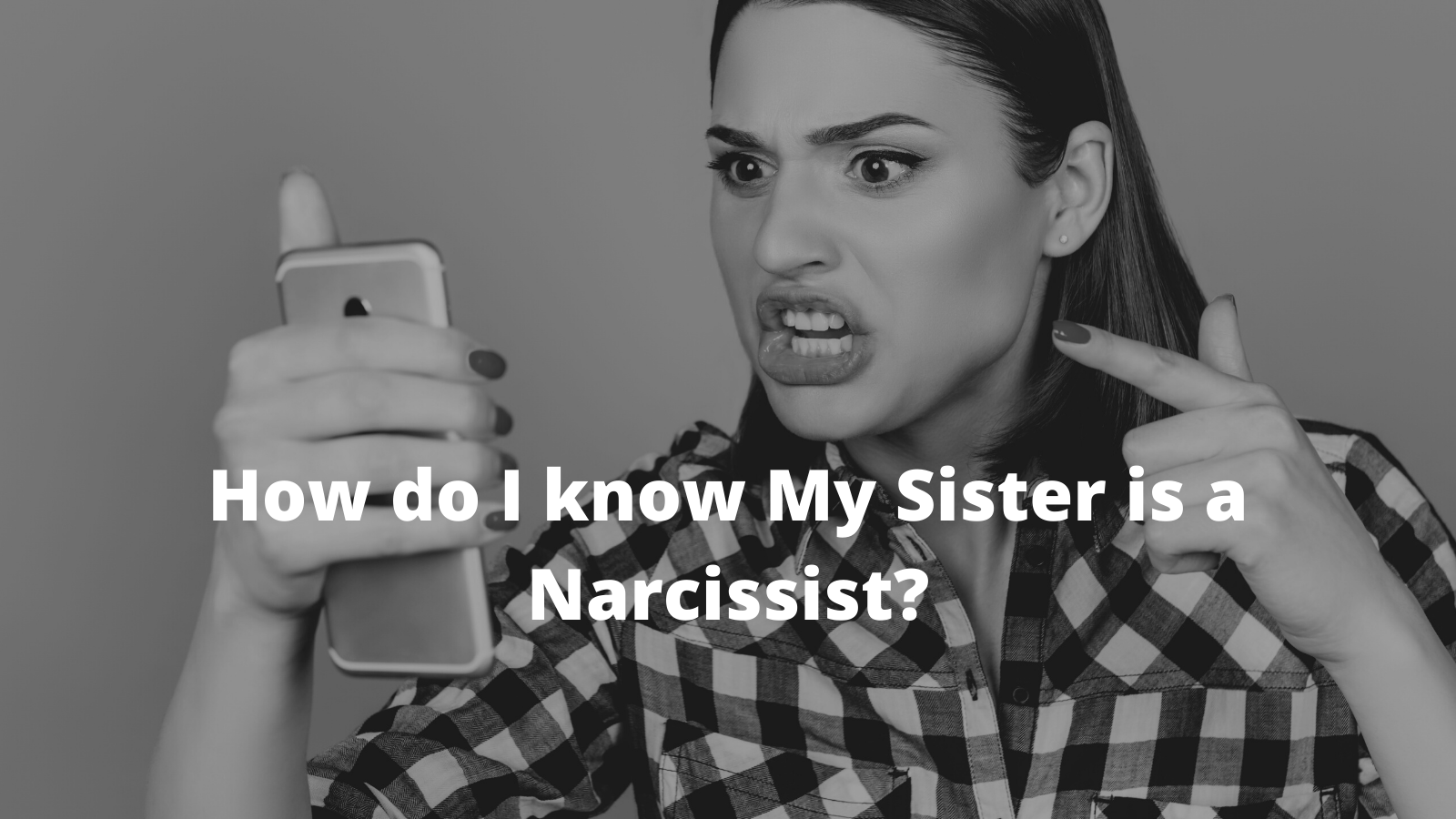 My second to youngest sibling B, is eighteen years younger than me. I witnessed first hand how she was neglected by my narcissistic mother and violent narcissist father. She was born to the second group of siblings. I am the oldest of the first three, all born within four years to a 21 year old mother.

The first of the second set of three children were born eleven years, eighteen and twenty years later.

When my sister B was born my mother had divorced my father and was suffering from severe mental health issues. She had been ‘sectioned’ several times over the years and spent a large amount of time in Winwick Mental Hospital.   She took valium and Mogadon and lived in a stupor, in no state to look after a baby.

I left at 15 years old and when my sister was born I was at University. One day I visited my grandmother whom I lived with when I left. She was at my mother house so I went to see her there.

When I arrived, my mother was behaving like an old decrepit woman, dragging her feet around the house with her hands clasped together as if afflicted by terrible arthritis.

My baby sister was lying in her bassinet.

My grandmother was trying her best to look after them.

I remember feeling totally incredulous and helpless. I was eighteen and had my own life and had no intention of becoming involved in her games this time and subjecting myself to more abuse. This is what the fourteen year old me wrote about living with violence and abuse. (“I Don’t Want To Go Home”)

I had had enough of taking her to  Winwick mental hospital on the numerous times when she was sectioned.  And, where was my father – my sister’s father?  He was a violent narcissist  so he couldn’t care less.

Eventually my mother remarried my father, her abuser and went on to have another baby, my sister H. This is my youngest sister who is diagnosed with Bipolar.  That is another story of a life ruined by narcissism. Here is a transcript of a telephone converation I recorded in 1996 when she 16 and was pregnant.

My older sister D, who moved away to Germany –  the third sibling,  wrote this in a letter,

“***** never stood a chance. She’s probably had it the roughest. She hasn’t even had the basics. She was lucky if she had a decent meal on the table, never mind with Mums madness and all that goes with it!

I’ve had enough of the Winwick scene to be honest.”

My beautiful and talented sister B with her sparking personality, love of dance and long blond hair had a baby at 16.

Our lovely mother threw her out so she came to live with me for a while before moving in with the parents of the babies father. This baby now grown, is also a narcissist with two children of her own and has no contact with her mother. I don’t think my sister has ever seen her grandchildren. My niece’s children think her ‘step’ grandmother is their mother’s mother! I am not sure how long she will be able to tell that story – another facade creating lie by a narcissist.

Time passed and my sister and I had contact off and on until I let her stay with me when I was going through my divorce. She used me for what I now know to be ‘residual benefits’ . For example she had no money and had toothache so  I paid for private root canal treatment so she didn’t have to wait for treatment.

I realised she was an alcoholic when she hid vodka bottles down the side of her bed. I contacted AA for her but she wasn’t interested. She had night terrors and strange ramblings and I was afraid for my three children who witnessed this behaviour.

Many ‘red flags’  of narcissism were present but I did not know about narcissism at the time.

For example. she said she was studying Molecular Biology and Statistics at university when she has no entry qualifications or money to pay fees. This was in 2006. Strangly she is still using the statistics delusion in 2018. I found this in her facebook page. 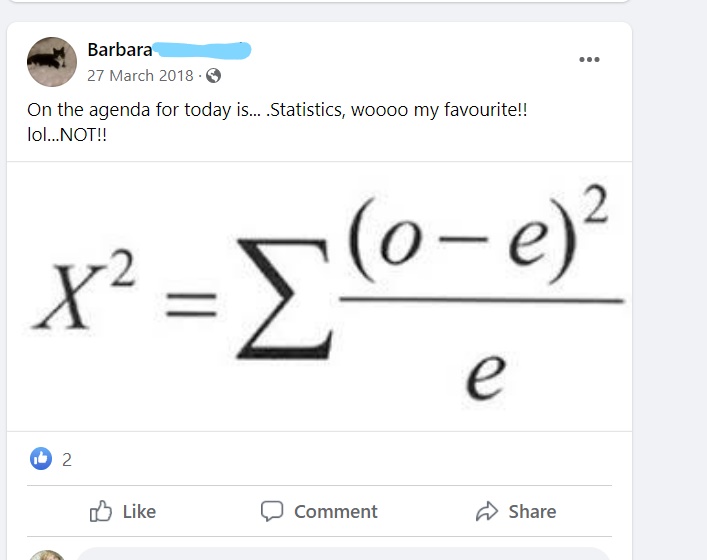 She helped herself to Champagne and drank it with men she had met on dating sites. She used me for money.

Eventually she had to leave.

It was extremely upsetting and distressing at the time. I had no idea about narcissism and that I was a caretaker.

I saw the legacy of my mother and father before me and I hated them even more for what they had done to their children.

I had no contact with her until my sister D died suddenly in 2021.

By then I had discovered the condition known as narcissism and learned about Narcissistic Personality Disorder. (NPD) I have been a victim of narcissistic abuse all my life.

I decided to DM her on facebook to talk about my sister’s death  and see how she was doing. By now I knew she has NPD but I was not expecting such a fast activation of her narcissism and for the instant manipulation, lack of accountability and abuse! Here is the thread. 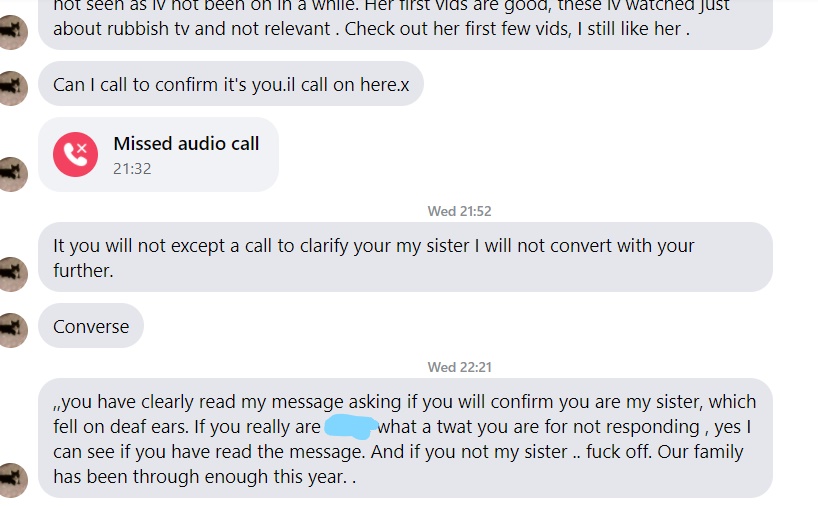 I was delivered a short sharp lesson which you can read for yourself.

The gransiosity, self-importance, entitlement, abuse, blame, manipulation, lies and fantasy ‘delusions’ and most clearly the narcissistic need to control  are all demontrated in this  short messenger interaction.

This time she is studying with the Open University and when she has finished she is going to be a lecturer working at home for the OU!

She immediately calls me.  I did not receive the call. I have no idea how Facebook calls work, and there is no way I would drop everything to speak to her.

This failure to comply signals a loss of control to a narcissist and she is ‘wounded’.

She then attempts to manipulate me into calling to ‘confirm’ I am her sister even though she has chatted happily and I have already  answered her questions to verify who I am.

She won’t give up though and insists that I call.

She becomes abusive when I won’t do as I am told and calls me a ‘TWAT’.

So that is the sad end to any further contact with her.

It is very sad and hard to accept that this once beautiful and talented human has been thwarted by two narcissistsic parents. It is frustrating that she will never see it and make the changes needed to move her life forward, to fulfil her potential and to have happy loving relationships with a partner, her child, grandchildren and siblings.

She has in fact repeated the life my mother had with no contact from four of her children, no partner, my father died at a young age from lung cancer thirty five years ago, and two children who physically assaulted her on numerous occasions which became the norm because three narcissists cannot be in the same room without violence.

They all need fuel and to control. The one who is most aggressive has the most control.

She is destined to live in her tiny social housing flat, reliant on drink, with no relationships, on welfare for the rest of her days.

I have realised that there is no point in feeling sad or trying to help her because she, being a narcissist thinks her life is perfect, she is perfect. It is everyone else who is wrong, stupid and unappreciative of her wonderousness  and she believes the illusions and fantasy she lives within.