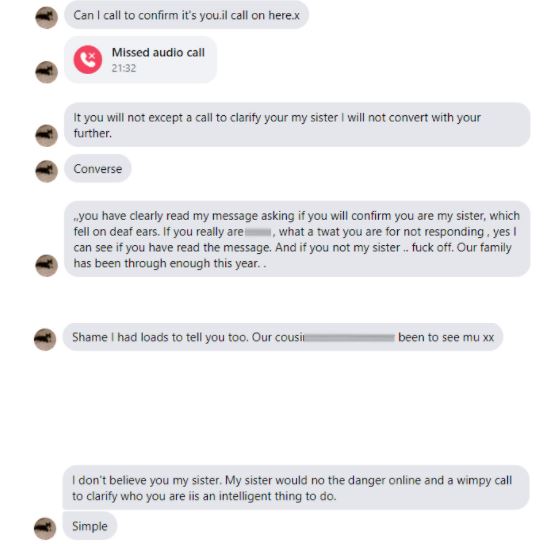 This thread shows a conversation with my narcissist sister. The thread demonstrated the lies, manipulation, grandiosity, sense of entitlement and delusions that narcissists use to attempt to control people.

I reconnected with my sister in 2022 after 10 years as my older sister died suddenly. I found her on facebook. Since her behaviour last time we met and her drinking caused me to go ‘no contact’ I was wary of what I would find and soon discovered I was in for more of the same abuse and aggression.

She immediatley tries to manipulate and hoover me by calling me using facebook which did not work so she insists that I call her to ‘prove’ it is me.  She askes questions which I answer and she chats for a while before insisting once again that I call her so she can start the hoovering process again.

When we last met 10 years ago she believed that she was at university studying bio-molecular science which is a lie as she has basic quaifications.  She talked a lot about doing statistics which she must think is s big deal. She says she had to drop that degree because she had a bad back. Knowing what I know about narcissism that is most likely lies and a pity play. It is also an excuse to drop out of the imaginary Bio Molecular Science Degree.

To my surprise she is still keeping up the facade that she is at university – this time the Open University. As she has no job and is living on benefits I wondered how she will pay for this.  She is spinning another fantasy when  she says she will teach for the OU from home when she gets her degree!  This time she has ‘deferred’. It is all lies and delusion.

What amuses me is that she uses the term ‘our family’. She has no family!  Our mother is a narcissist who subjected her to so much neglect that she is an alcoholic narcissist with no job or relationships. She frequently beat my mother up in narcissistic rage!

She doesn’t see her daughter or grandchildren, or me, or our two brothers. My other sister is the only ‘family’ and as she too is a narcissist or maybe Borderline and Bipolar you can imagine what happens there!

One thing that was revealed by the interaction was that Gordon was smearing me to my family for a long time and I had no idea! What an idiot I was. Apparently at my fathers funeral which was over 30 years ago he was telling them all what was ‘wrong with me!’  You can read it in the thread where she writes about it.