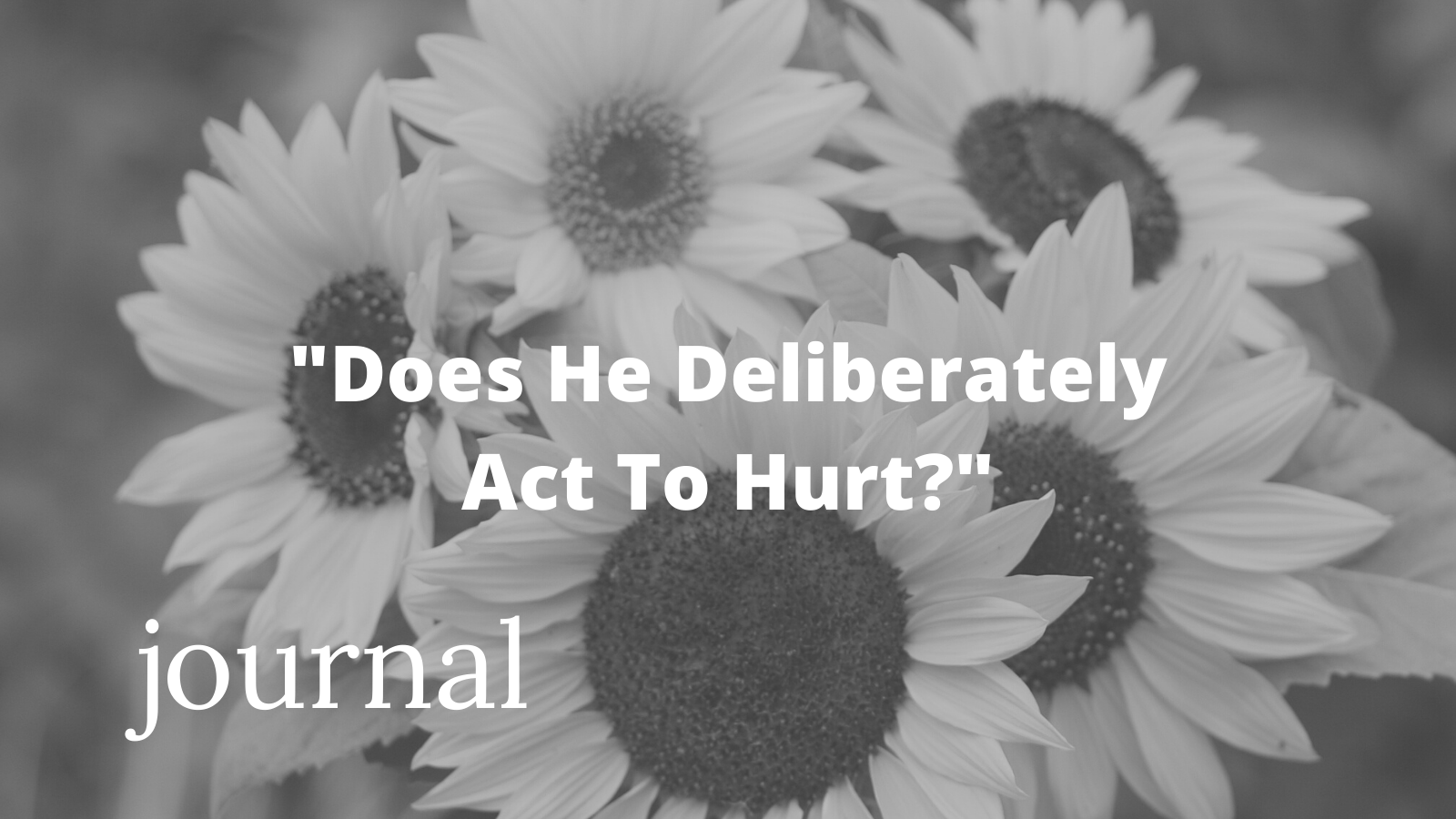 When I wrote this journal I thought he deliberately said and did things to hurt me. What I have learned is that because of the type of narcissist he is, he has no awareness of how he behaves or the effect it has on others. The clusters of behaviours he uses are those that have been called a ‘lower lesser’ or a covert malignant narcissist. All his behaviour is ‘knee jerk’ and his narcissism compelled him to behave that way. Because he is a lesser narcissist he does not have the cognitive capacity to deliberately plan and scheme so all his reactions to loss of control are on default. They are programmed in by his father when Gordon watched the way his father treated his mother.

Viewed Through The Lens Of Narcissism

Does he deliberately act to hurt?

“Does he not realise he hurts people? (I have explained all this to him.)

Gordon has criticised the way I laugh so often that I have stopped laughing in his company. He likes to mimic me.

When I make comments or pass opinions during TV, he tells me to ‘hush’ so I’ve stopped. If something interesting comes on the TV while I’m talking, he’ll also tell me to ‘hush’.

You know this as he does it to you. Bad mannered ignorant pig that he is!

This is the sort of dad I would like you to have; a generous of spirit dad who knows what you love, who makes time to talk to you and read with you and reflect on life, a dad who responds without having to be prodded and poked into action.

Today I have booked tickets for us to go to Paris to see our friends from Canada who are on holiday there. I am taking you because Gordon doesn’t want to go.

When I told him that Barry had emailed to say he had a spare bedroom if we could make it over.

“He can’t have wanted us to go over because he emailed so late.”

A typical negative response from him. We had three weeks to plan but he thought this was too little notice.

He never plans trips, days out etc.  I instigate everything.

I often wonder what would happen if I behaved like him. We would do nothing, go nowhere.

If I look at his father, I see the same patterns of behaviour. It’s such a pity Gordon doesn’t recognize this.

Anyway, we are off from Liverpool on July 12th, (Saturday) with 3 nights in Paris and 4 at Disneyland!

My worry is that this fear of not having lots of notice, lack of spontaneity, rubs off on Dom, Britt and Alyx.

Life is better if approached with spontaneity and no fear!

So where are off to buy rucksacks in which you can carry your own clothes.

Last night’s meal passed without the usual nagging from Gordon.

Just a “go easy with that Dom.” when Dom poured the ice-cream sauce.

I avoid all situations where I have to talk to him now because he frustrates and irritates me with his petty, critical attitudes to everything and particularly towards me.

I don’t feel like being in the same room for fear of being mimicked, ridiculed, the sarcastic comment, the irritated sigh if I say something which he doesn’t approve of.

One quality which he has passed to Dom now is to laugh at people with a smug snigger as if to say ‘your pathetic’.

I really detest this quality in him. I sometimes do it back, but it provokes a ‘and you say I laugh at people’ from him.

He doesn’t realise that I am doing it to show him how it feels.

I feel a huge burden has been lifted from me and I no longer have to put up with him and carry this person through life. I am living my own life, regardless.”

Not knowing that Gordon is a narcissist at this time, I was in a state of perpetual confusion and perplexed at his behaviour. I wondered if he knew he was doing it. I know now that he is a middle lesser narcissist and that he does not know what he is doing and he acts purely by conditioned reflex self defence action.

I can answer my own question, why does he not stop doing it? He HAS to do it because of his narcissism. He is blind to his behaviour and it’s effects on people. He is a damaged non-human covert malignant narcissist. See this  video which described him perfectly.

The mimicking by Gordon was taught to him by his father John. He watched his father abuse his mother every day as he grew up. When one bears in mind that I knew the narcissist from the age of 17 I saw first hand for more than 30 years the abuse he and his father perpertrated on poor Barbara – wife and mother.

I have videos of them in action, ridiculing and belittling her.

He loved to mimic me followed with a smug, self satisfied expression.

I remember he would look at me, make a sideways smirk, hand on hip and sniff the air before walking out of the room.

The journal entry tells why I took the three children to Disney Land Paris alone.

The entry talks about the way Gordon picks on Dom which was a regular event, especially at mealtimes. Gordon turned into his father and the nagging, moaning and critisism started everytime we sat down to eat a meal together.

I felt so sorry for Dom. I felt and still do feel guilty that I have ruined my childrens lives by choosing a narcissist as a father

In 2006 I had enough and stood up at the table saying that I was not sitting down at the table ever again if he didn’t stop! It seemed to work for a while.

I wonder what the critisism of Dom was like from the narcissist when I wasn’t present?