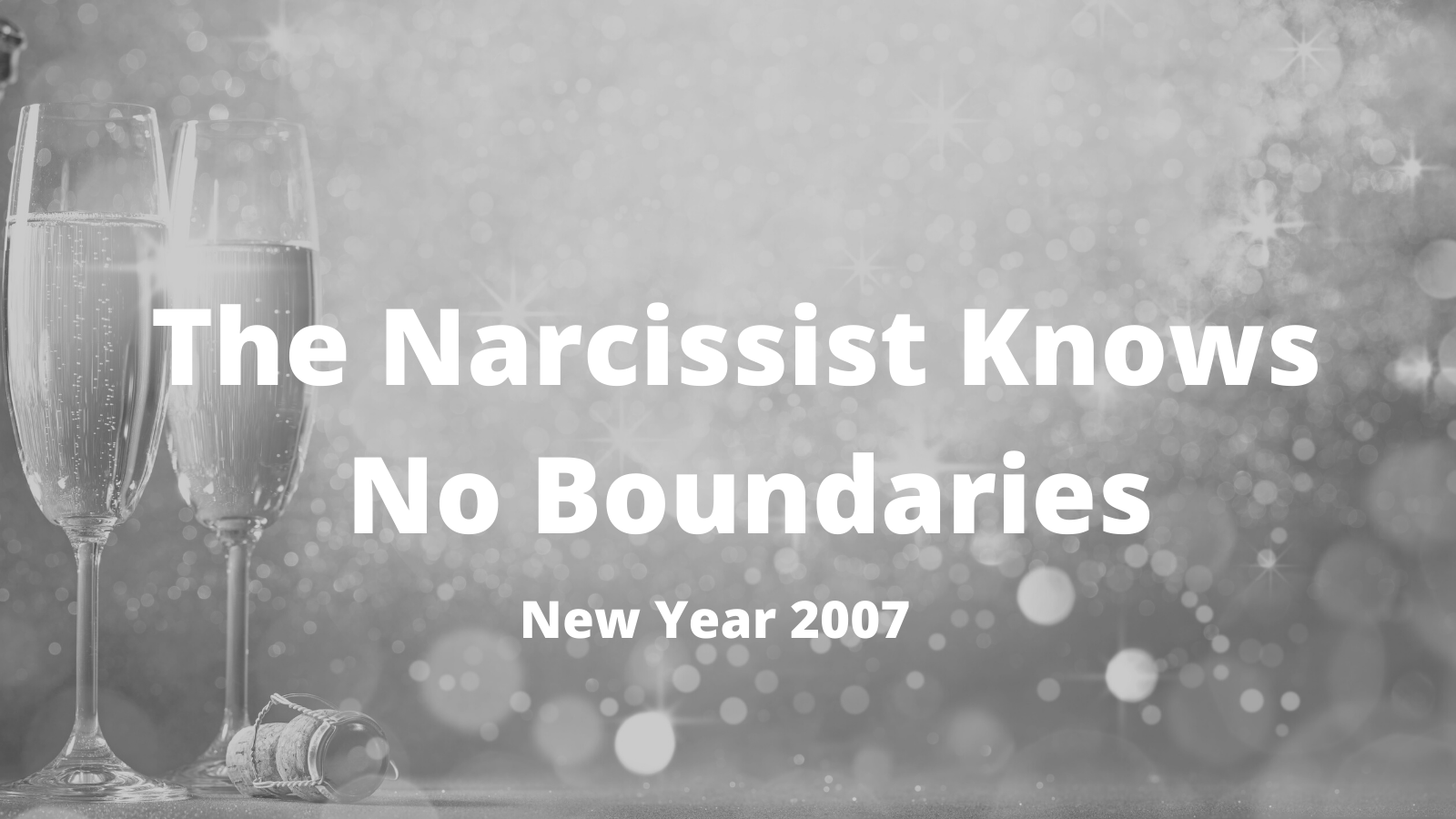 Christmas and New Year 2007 was hell!  For some stupid reason I decided to host his family for a meal and family get together and I agreed to take the children to a New Years Eve Party with his relatives.

I was trying to make things as normal as possible for the kids and also the narcissists relatives from Australia, Chris and Maria had been planning to visit for almost a year. I knew them from years ago and wanted to meet them again.

Chris was studying to be a psychiatrist.

Interestingly, we talked about the narcissist and they came up with some ideas, like passive aggressive personality and ‘he doesn’t know he’s doing it’  but at no point did Chris tell me he was a narcissist!

Thinking back I am amazed by this – that a person studying psychiatry could not spot a narcissist! If he couldn’t what chance had I?

No Boundaries in The Eyes of the Narcissist!

One of the best examples of how the narcissist saw no boundaries between us, his sense of entitlement and exploitation of me was the New Years Eve ‘taxi incident.’

Prior to New Year, during Christmas, I picked up the children from the narcissists parents house and witnessed the family; parents, brother-in-law, sister arranging taxis for New Years Eve.

I was taking the children to the New Years Event at the Masonic Hall, for the children’s sake and certainly not for me.

The narcissist and his relatives were, of course moaning about the cost of the taxi fare and even more concerned about the price with it being New Years Eve, but said they were going to book taxis anyway. I though no more about it.

At the end of the New Years Eve event, about one in the morning, the narcissist came over and said that he had told them that, as I had spare seats in my car that I would give some of them a lift and take them home!

I asked what happened to the taxis and refused to do it. I had not been asked.

I had three tired children, it was 1.30 a.m. and I was going straight home some 40 minutes away!

I had earlier that evening driven my daughter from a badminton tournament in Milton Keynes and was tired.

They must have arranged me being the taxi service between themselves well in advance and I was giving them a lift!  The narcissist ‘volunteered’ me as a taxi service and assumed I would agree!

As you can imagine, because I didn’t do as I was told and the narcissist lost control I was verbally abused, laughed at, smeared in front of his relatives and told,

He said I was a mad woman and an evil witch and they all hated me.

For some time after the event he like to tell me what they all thought of me and how they couldn’t believe what I was ‘like.’

I learned that the narcissist had to ferry the party people home, in relays making a few extra journeys for him.

Another incident which shows this lack of boundaries was when his brother and sister in-law brought Christmas presents to the house for the children. Gordon asked if they could come to visit and he came with them.

I replied that I wasn’t expecting presents and I didn’t have any and why did he not have any for John and Sandra?

Rather than the narcissist owning up, Gordon lied, blamed me and said,

‘Oh! I though you had them. I saw you wrapping them up before.’

We had split up for six months so why would I still be responsible for his relatives Christmas gifts?

This is what I wrote after the Christmas event 2007.